It seems that Kazakhstan goes cellular glass. We found a few topics about cellular glass in the THE STATE PROGRAM on industrial development of Kazakhstan for 2015-2019. We make some citations:

It is not clear whether they wanted gravel or boards or both. But the evolution to mineral foam is very positive.

I found conference proceedings  about VIP (vacuum insulation panels) and I made an upload because these methods are really interesting. The introduction lecture by U. Heinemann, Bavarian Center for Applied Energy Research, Germany is maybe the most important one for this post, I make two citations:

The first citation shows again that the thermal conductivity from glass wool lowers from 0.038 W/mK to 0.002 W/mK by removing the air or an improvement of 0.036 W/mK. We all know that the thermal conductivity of still air is only 0.026 W/mK or we conclude that the air is not still in low density glass wool. It seems that natural convection is much more important than simulations suggest, which means that forced convection is also much more important in low density glass wool beyond the protection of a laboratory.

We found a paper about gravel with focus on the hygrothermal properties, written by the “Norwegian Building Research Institute” inTrondheim. The measurements are performed on foamed glass gravel Hasopor produced in Norway.

The conclusion of the report is clear:

Even under complete immersion after a long time, the thermal conductivity only doubles like shown herunder.

The previous post handled already about natural convection in mineral wool. We found the following paper about a simulation of an attic insulated with mineral wool. It is written by scientists from Saint-Gobain and “Ecole Nationale Supérieure de Chimie et de Physique de Bordeaux, France”. The abstract is as follows:

Convection phenomenon inside the insulation materials that are representing porous media may be responsible for important increase of the heat flow density through the building element, when the climatic conditions are very cold. A numerical study based on CFD software simulations is performed in order to find out the conditions for which the convection onsets and furthermore to quantify its influence on the Uvalue of the building element – that is a loose-fill attic. The geometry of the grid is very close to a 2D cut in a real attic. The most significant heat transfer phenomena present in the attic – conduction in solid elements, convection in porous medium, convection in air spaces are taken into account. This is done exclusively by using the mass, momentum and energy conservation equations. The insulation materials analyzed are highly permeable mineral wools. The results are expressed in terms of critical Ra* numbers and variations Nu* against Ra*. A critical Ra* value of 28 is found. Three products, (2 –in glass wool, 1 – in stone wool) are studied – all showed absence of convection for outdoor temperatures higher than –40°C. The stone wool product is the most exposed to convection onset.

I have not any doubt about the simulations and it is realistic that more permeable wool is more sensitive for natural convection. But I am surprised about the assumed thickness: 0.5m. I doubt that many attics in France have 0.5m thermal insulation. I guess what can happen at lower thicknesses. It means I have to study Nusselt and Rayleigh numbers.

I found a PhD thesis about this topic “Heat transfer in Rockwool, modelling and method of measurement”, written by Susanne Dyrbøl in 1998, describes the phenomenon in detail. In this work, the effect of natural convection is described and measured in a vertical insulation layer.

To conclude, I mention a recent paper, which calculates the thermal conductivity in mineral wool. Natural convection is not taken into account … .

The more I study, the less I understand why cellular glass has only 1% of the thermal insulation market. Probably the recent price drops of cellular glass, initiated by GLAPOR will change that situation.

For a very long time, I believed that mineral wool is holding the air without any transport of heat due to convection like it is written by Eurima,  European Mineral Wool Manufacturers Association.

Mineral wool thermal insulation prevents convection by holding air still in the matrix of the wool. Still air is a good insulator. Mineral wool also stops radiation and limits the conduction of heat through the body of the insulation.

But by studying VIP (Vacuum Insulated Panel), I did not understand a graph, found in a paper about VIP’s.

Indeed, it is clearly measured that creating vacuum in mineral wool (removing the air) improves the thermal conductivity with 0.034 W/mK while the thermal conductivity of still air is only 0.026 W/mK. This means that in mineral wool under atmospheric circumstances, natural convection is present. Indeed, on the PAROC-website, we find the following graph with convection mentioned.

But if natural convection is present in normal circumstances, we have to think about the measurement methods for the thermal conductivity. In Europe, we have to live with EN12667, Determination of thermal resistance by means of guarded hot plate and heat flow meter methods. I am not allowed to give a link to this standard because citizen have to pay for digital standards, written free of charge by the industry. This standard includes already the possibility of natural convection in mineral wool:

Indeed, in case the cold plate is under the hot plate, there is no natural convection present in the mineral wool because the warm air can not rise. This is the case for the following one sample guarded hot plate system: 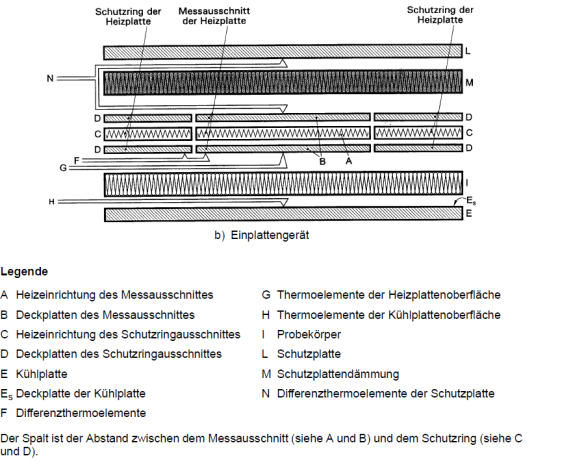 Maybe I did not understand something, in that case please correct me. But in the other case, in the above measurement system, natural convection is excluded and this approved system may give a thermal conductivity which is 0.008 W/mK lower than in reality on a dry perfect roof or about 20%. In case of a two sample system, the error could be of the order of 0.004 or only 10%. For higher densities, the deviation should be smaller. I heard that mineral wool samples are used for round-robin test of thermal conductivity measurements. I will not be surprised by large deviations between different EN-approved systems.

It seems that to get the insulation value on the roof (most important part of the building) we want and trust, we have to go to higher densities above 100 kg/m³ or more. But in that case, GLAPOR cellular glass, directly foamed from recycled glass has a comparable price with high density mineral wool and guarantees to be convection free, non-combustible, load bearing, vapour tight and water tight with a stable thermal conductivity.

A customer asked me the energy price in Belgium and I could find a document of the Belgian government, published end 2014. I also could find a study about the price of recycled glass. With both, we are able to estimate the production cost of cellular glass without labour cost.

The energy price depends strongly on consumption like shown in the following tables.

Main project objective was to demonstrate the feasibility to reduce to zero the glass rejects that
do not come from cities’ collections and that, due to their particular chemical compositions can
not be recycled, neither by glass container nor by ceramic industry. Examples are television screens, mosaic and artistic glass, PVB containing glass from the car industry, glass textile sheets, glass of lamps. These glass rejects are actually landfilled. The project aimed to demonstrate new technologies which allow their use in the production of glass based insulation materials with a high performance in thermal insulation, mechanical strength, fireproof and ecocompatibility, which traditional production is too expensive for a large market introduction. It aimed as well to foster future market introduction by sensitizing on energy efficient building. 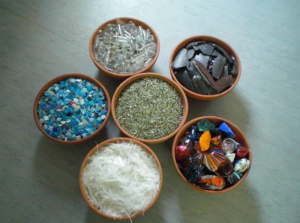 The following glasses are investigated:

and also the emissions and leaching out of the different glasses.

The extra investment of a lehr and finishing equipment allows to produce blocks according to the continuous foaming method.

When we spak about passive housing, there is more needed than a small U-value. There is also the question of the air tightness. A nice information source is the PAROC-site, from which I made a pdf printout. They give the following U-values for passive housing:

But for the air tightness, we need:

where n50 gives the number of times the air me be replaced per hour with a pressure difference of 50mbar. For passive housing, even the air permeability of the wall becomes important. In the following, we discuss further the case of mineral wool in passive housing.

Due to the premeability of mineral wool, it is necessary to install an air barrier / vapour screen at the warm side and a wind screen at the cold (outside) side to avoid (cold) air intrusion.

The installation of the air barrier / wind barrier is shown hereunder. It is very important that the windbarrier is at least five times more permeable for vapour than the air barrier to avoid internal condensation.

The situation should become less critical when using high density mineral wool. The PhD work of Piotr Kosinski calculates the heat loss due to wind, even at 0.5m/s (forced convection) on the wall insulated with mineral wool. It is mentioned that on the long term a higher density has only a minimal effect. The following picture shows a more realistic wall with mineral wool and a wind barrier.

These problems can be avoided by choosing for GLAPOR cellular glass because it is vapour and wind tight. GLAPOR cellular glass has about the same density as high density mineral wool (130 kg/m³) and it is produced with distinct lower temperatures. For that reason, it is sold at the same price level as high density mineral wool.

I found another comparison with cellular glass. Like in a previous post, I assume that the report is correct but I extend the benchmarking to get a better view.

I found the following description for this kind of foams on Wikipedia:

These are flexible, closed-cell, rubber foams based on NBR or EPDM rubber. Flexible elastomeric foams exhibit such a high resistance to the passage of water vapour that they do not generally require additional water-vapour barriers. Such high vapour resistance, combined with the high surface emissivity of rubber, allows flexible elastomeric foams to prevent surface condensation formation with comparatively small thicknesses.

More information was found in the following prints (Doc1 and Doc2) from the this website. I found there the following important facts:

The three main components used in the manufacturing of elastomeric closed cell foam insulation include the following:

The product will not absorb moisture, or trap dirt or debris that supports the growth of mold. It is a fiber-free, formaldehyde-free, low-VOC material, so it is a good candidate for those facilities that are especially concerned with IAQ.

Closed elastomeric foam is in fact closed cell rubber foam. Besides the remark of formaldehyde-free, low-VOC and fiber-free, the áuthor forgot to mention that working with rubber itself can be a risk. Occupational exposures in the rubber-manufacturing industry are carcinogenic to humans (Group 1).

I remember that closed cell elastomeric foam has a smaller thermal conductivity than cellular glass (can be compensated by thickness) and it is flexible. But cellular glass has a much larger temperature range ( from cryogenic to 430°C ), is absolutely vapour tight and does not absorb any water. GLAPOR cellular glass is foamed with materials, all belonging to the IARC classification group 3: Not classifiable as to its carcinogenicity to humans. Closed cell elastomeric foams are only necessary when a flexible substrate needs thermal insulation.