Every two years, there is the glass technology fair in Düsseldorf 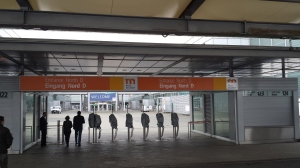 . It is not my favorite exercise, certainly in times when float glass industry is suffering. But I was surprised by the many presentations about cellular glass, like for example Francke. They are working together with Glamaco Maschinenbau, a company which was working for the old Coriglas plant in Schmiedefeld, Germany. But another demonstration was astonishing. Indeed, Lfg or Lehr for Glass, who has built the plant for STES in Vladimir in Russia, had a nice 3D model of a production line, together with a movie of the running line and produced cellular glass. The produced cellular glass had extremely fine cells for such a light block. The first line was successfully started and the second line will be running in two weeks, together producing about 100000m³. Oleg Gerber

, owner of Lfg, was very proud he did the job with ordinary robots, who are very flexible to program and easy to replace in case of failure.  Oleg, a real Ukrainian, was working a long time for Ernst Pennekamp GmbH&Co, a glass lehr constructor and he decided to make the big jump. He found the capital and he did it, I have a large respect for this self made man. Some time ago, he asked my opinion about his robot, running in a pilot plant in Wuppertal, Germany. I still remember that visit, it was the first time I saw a white powder to be foamed to a nice black foam in an electric furnace under air. I realized I made an error 7 years ago, when I was thinking that cellular glass was at the end. Indeed, we are at the beginning of new challenging wave.

It was a long time very quite in the cellular glass business but the last seven years, a huge extra production capacity for boards was built in Europe, China and Russia. STES should sell their material NEOPORM about 40% cheaper than other manufacturers for the same quality and still with good profits. Next to that, we have at least 1000000 m³ foamed glass gravel, used for floor thermal insulation.

This is the start of important price drops, making cellular glass accessible to everybody, who likes to behave ecological and wanted to avoid foams with a rather short life time. Andrei from STES and Oleg from LFG are doing the same as for example Michael O’Leary from Ryan Air for the aviation industry. Thanks to him and other price breakers, ordinary people can take the air plane while in the past, it was reserved for the happy few without any good reason. Thanks Andrei and Oleg, you both are great guys.

Making a master and doctoral thesis was my best time during studying physics. It should be nice if again more students should perform research on cellular glass beyond the constraint of making profit. In this post, I mention three nice studies:

Especially the last thesis is important for the development of cellular glass, foamed from waste glass with alternative foaming agents.

BELGLAS would be pleased to help new PhD-students all over the world in their research on cellular glass.

Every physicist, working with glass, is fascinated by the glass transition. This glass transition range is responsibe for the residual stress on the glass. In this range where the glass is not purely elastic but also not purely viscous, behaves the glass  strange. Its properties depends on the way it is cooled. Thermal expansion, viscosity and specific heat depends largely on the cooling rate through the transition range. The first ones to find that experimentally were L.R.Troussart and P.Gérard from Belgium.

The first ones, who could describe theoretically the glass transition were  P.Gilard and J. De Bast, also from Belgium. With their equations, the residual stress, being the sum of relaxed stress and structural stress could be calculated. The structural stress is a consequence of the fact that the surface of the glass has another cooling history as the bulk of the glass through the transition range and so slightly other properties.

The structural part becomes very large for tempered glass, due to the very fast cooling but becomes negligible for the relative slow cooling of cellular glass. This slow cooling is a consequence of the fact that temperature gradients are easily developed in cellular glass due to its low thermal conductivity.

For most cellular glass people, the annealing is the most difficult job because it is a black box where you can’t see what is happening. Also for float glass, CNUD EFCO is market leader for annealing furnaces. The gravity point of cellular glass and for float glass lehrs is already a long time in Belgium. Probably is that the heritage of Gilard and De Bast, great guys ….

Industrial historical research is always fascinating. Although you know the instrument, it is nice to find the original patent. In this case, this brilliant invention was patented in 1953. There is still a lot of handwriting on the patent, found by Google Scholar, also a fantastic instrument.

The patent explains first which problem is solved with the invention. Indeed, the powdered batch does not sinter homogeneously but in small and large parts, all irregular shaped. After sintering, when the foaming starts and the parts are expanding, it happens easily that two parts touch and are also lifting each other, inducing a fold because everything is confined in a mold. A fold in a glass foam disturbs the cellular structure and so the mechanical stability, reducing largely the productivity.

By using this dicer, regular blocks of powder are formed, which will also sinter in a regular homogeneous shape. During foaming, the sintered blocks touch but lifting is less probable and so the formation of the fold. By working with small blocks, the heat can better penetrate into the little blocks for a more homogeneous sintering and foaming.

By using a dicer, we can expect an improved productivity by less folds and faster sintering. The patent also mentions (column 5, line 31) that the patent is not only valid in a mold but also on a belt conveyor. The dicer could be replaced by rotating devices like for example a series pizza knifes.

This patent is a typical example of very intelligent research: simple with enormous excellent consequences. After so many years (61 years), it is still used by Russians and Chinese cellular glass producers. The picture showed a “diced” block from the STESS factory in Russia.