Cellular glass is a vapour tight, non-combustible thermal insulation with a high compressive strength. In the builing industry, cellular glass boards are mainly used in flat roofs, less as floor insulation and almost negligible as facade insulation. The rather large compressive strength is in fact only used as thermal interruption at the foundations, although this property could also be very usefull in self supporting structures. A very good introduction is given in a paper about arches and bridges. It is demonstrated that the entire arch ban be under a compressive stress when a certain curve is respected. 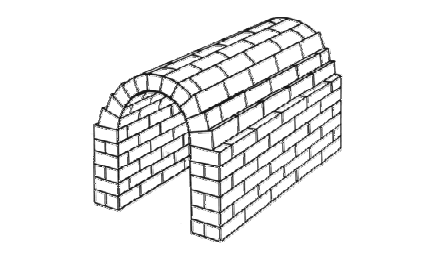 If we would replace the bricks by cellular glass plates, we obtain a stable structure which is vapour and water tight, non – combustible and thermally insulating. The structure can be prefabricated with cellular glass boards of 3m x 1.5m as delivered by GLAPOR. In case of 3 layers of 15cm, the passive housing norm is easily achieved. Rendering outside and inside with natural hydraulic lime is one way of finishing. The complete structure can be combined with cellular glass gravel floor insulation between cellular glass plates. I guess that we arrive at a low cost passive housing system in case of prefabrication, transport with containers and fast building at the job site.

Installation of windows should be easy because the window has almost exact the same thermal expansion coeffcient as the cellular glass. In principle, a window frame is not needed, the window pane can be directly installed in the cellular glass wall. I guess that a high air tightness, typical for passive housing is easily reached. A  building could look as follows but the inside ceiling needs extra support (or can be hanged) in the case of a cellular glass construction. 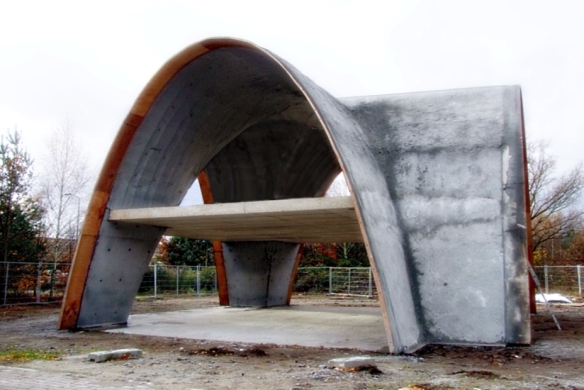 This is only one suggestion to work with cellular glass as the complete supporting outside structure, which is implicit thermally insulated. I am convinced that we have to work in this philosophy and to avoid to work with structures, which needs separate thermal insulation. In fact, this last method is patchwork on the building tradition since cement was used. Before cement, lime was used for walls about 1m thick, which was thermally equivalent with 5cm mineral wool. The introduction of cement in the home building industry was in fact an ecologic step backwards