Today, thermal insulation producers in Europe have to declare the thermal conductivity in a special format. This format, the declared value,  motivates the producers to

The procedure to calculate the declared value is described in the standard EN 13162 : 2008 and the measurement method in the standard EN12667, all part of the general standard EN13167. This standards system became so complicated that companies have today to hire a VP Standards. But the fact that ordinary users, like me, have to spend a lot of money to buy these standards in order to know the rules is a shame.

For the declared value calculation, I found a good public document. It explains how to calculate the declared thermal conductivity with the average value, the standard deviation and a factor depending on the number of measurements. This factor is given in the following table and is the only one thing you need from the standard. 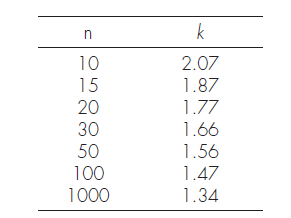